Our first vacation together was in 1985 and was a blissful week on the Hawaiian island of Maui, full of all the things you might imagine: brilliant sun, crystal blue ocean, palm trees, rainbows over the mountains, a few umbrella drinks, and a traditional luau. We survived the requisite 3-hour drive to Hana and back, piloted a Cessna around the island, and fell in love with Hawaiian music, but we couldn’t leave Maui without experiencing the climb up Haleakala crater. Little did we know what awe-inspiring lunar beauty awaited us at the summit.

Haleakala translates to House of the Sun, and visitors to Haleakala National Park typically make the trek at sunrise or sunset. Wanting a leisurely morning at the beach, we opted to watch the sunset. It took about an hour to drive to the summit, which is at an elevation of 10,023 ft. The drive was easy and we passed brave bicyclists coming down the mountain in the clear, dry weather. We were warned to dress warmly—the temperature drops about 30-40 degrees as you climb—so we were prepared for the cold, but not for the nearly complete silence that surrounded us.

Above the cloud layer, the earth’s atmosphere is thin and unbelievably quiet. We could almost hear the silence settling around us like a thick blanket. The rugged lava landscape looked like it was from another planet. As we explored the area around the visitor’s center, Hugh spotted sea shells in the lava. What kind of powerful force was behind the transportation of those shells? Were they pulled along for the ride as the volcano rose from the ocean depths? We left the shells where they were for another explorer to find and ponder. 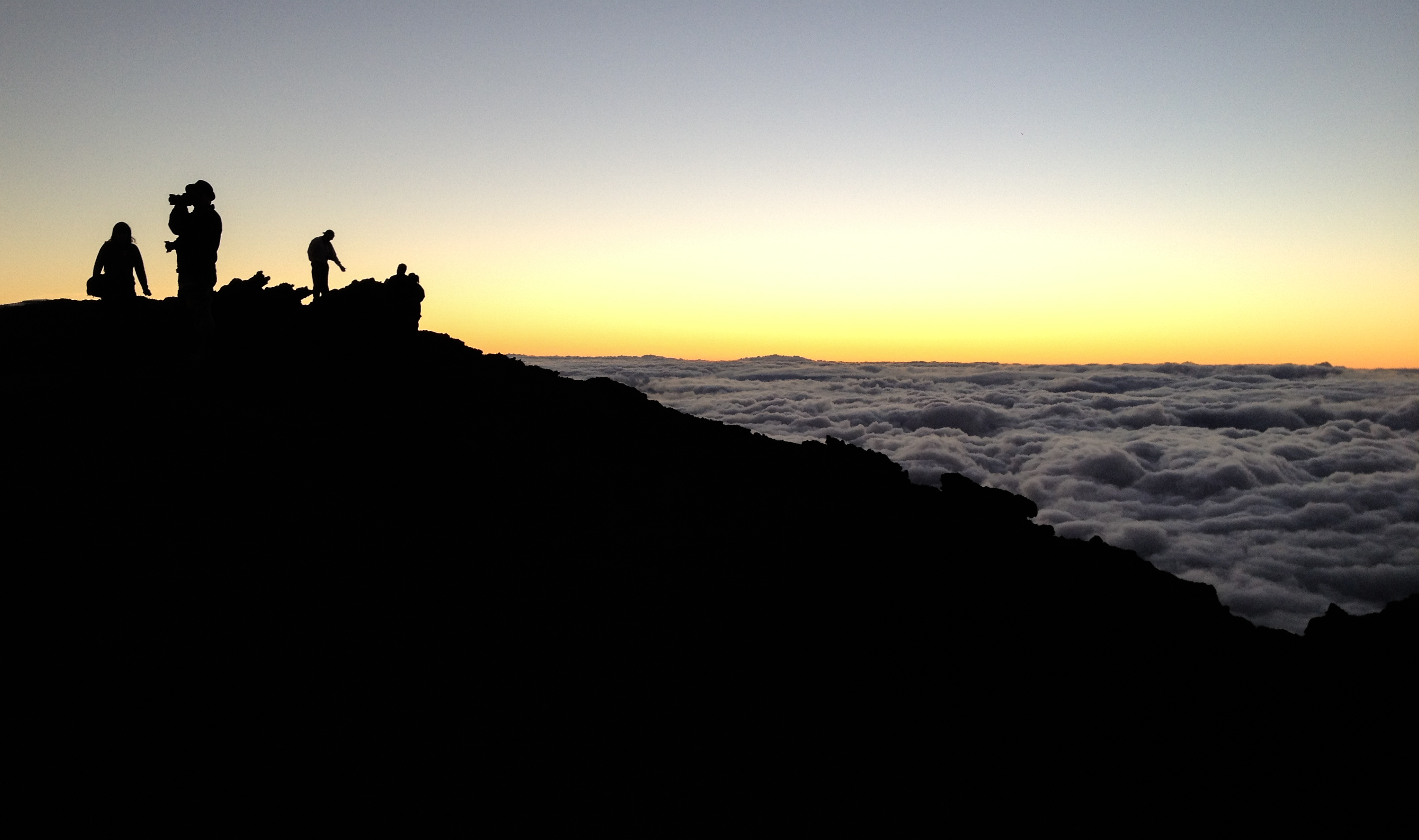 The sun was beginning to set so we perched on some lava rocks to watch its descent below the horizon. Starting as brilliant orange, the sun soon mellowed into shades of gold and yellow. The clouds below us transformed from fluffy white cotton to dusky gray faintly threaded with warm pink. Then, to our amazement, a full moon rose in the east just as the sun was dropping below the clouds in the west—truly a once-in-a-lifetime event.

The sun’s final golden rays outlined the crater in black silhouette. Quickly the yellows and grays became soft pinks and blues as night descended. It became dark and cold very quickly, but the stars began to appear, so we steeled ourselves to stay a little longer. We were soon rewarded with a display of the Milky Way like no other we had seen. It felt close enough to reach out and touch, and the stars were crystal clear and bright. Chilled but inspired we reluctantly left, having captured photos of our experience to enjoy for years to come.

We returned to Maui in 2013, and to our delight it was still the same beautiful place we remembered. Even though we only had a couple days to spend on the island, we couldn’t leave without making another trip to Haleakala to experience what we hoped would be another magical sunset. Driving up the wind-y (and windy!) volcano road we were enveloped in clouds and chilly rain, and we desperately hoped that the weather would soon clear.

Finally, we emerged through the rain and the clouds to the place in our memory. Here again were the same rugged lava slopes, the same heavy blanket of silence, the same swirling clouds, and the same beautiful golden rays of sun. We sat and photographed the sunset, which was just as beautiful as we remembered. As the final golden rays again created a black silhouette of the crater, we knew that that memory was destined to be captured in a future fountain pen.

Braving the cold, we again awaited the appearance of the Milky Way and the countless stars that we knew would soon light the sky. In that moment, we felt—more than ever—the need to continue to live pono and treat the environment gently and with great care, so that these beautiful and sacred locations will be available to countless generations of visitors to come.